Some people think Ama divers are always diving and this is how they make their livelihood.

Well, it's half right.

The other half I mean is Ama divers are not always diving and it is not the only source of our income. We have a lot of other jobs to make money.

It depends on where you live actually, but in my town, Ama divers can go diving less than 100 days a year. It's because of weather (esp. Typhoon in summer) and some annual events or festivals on some specific dates, we cannot go diving.
In our neighborhood island Toshijika, I heard people can do Ama diving only in summer.

So, if your income is only from Ama diving, it is somewhat risky and very unstable.

As far as I know, some of Ama divers in my town work at Oyster farms in winter, some work at nearby hotels or ryokans sometimes, some are helping their husband's job regularly.

As for me, I am an fisherman's wife.
I need to support my husband's work as well as my work of Ama.
In winter, fishermen in Ijika (my town) are in the busiest time of the year.
So, I have to choose whether I help fisherman's work or go Ama diving. 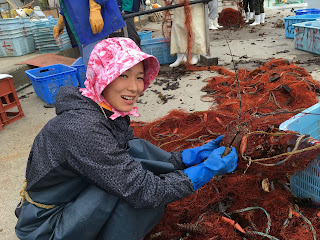 My husband is a very understanding person.
He always says to me, "You can choose whichever you want to.".
But now I feel more comfortable if I help my husband's job at the harbor.
I was pushing myself to go diving last year since I was not very good at it. I wanted to be confident in the water, and I wanted to prove myself as a good wife of him and a perfect person to be in this fishing village.

But my husband's master, a fisherman, told me not to hurry.
He told me that I have plenty of time to improve my diving skills. "You are young, and Ama divers can dive until 80 years old or more. Take it easy.", he said.

Thanks to him, I could've loosen up and become not to pressure myself.
Now, I can go Ama diving when I want to and I really can enjoy it.

Ama divers have many options, and we can decide what we want to and how much money we want to earn.

I think this is one of the great advantages of Ama and its lifestyle. 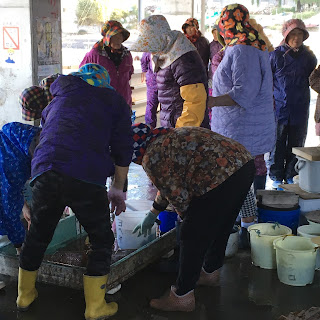 Posted by Unknown at 3:49 AM No comments:

When Visitors Come To Take Pictures of 'Ama'


Recently, there are some foreign visitors who come to see 'Ama' in our fishing village.

When I moved here two years ago, I thought I would never be able to use my English skills any more. But now, I can see that I was wrong. There are more chances and situations to use English here.

Those visitors are interested in traditional lifestyle of 'Ama' or local fishermen.

I'm so glad that many people get interested in our lifestyle. But sometimes, I worry about their behaviors to the old women.

I don't know other places, but here in Ijika, people are so serious about their jobs and traditional events.
I know visitors want to communicate with local 'Ama' and fishermen, and willing to take pictures of them. But some of them do not ask people if he/she can take their pictures.

"Can I take your pictures?"
"Shashin tottemo ii desuka?" (= above phrase in Japanese)

Or just show some gestures of taking pictures might be fine, if people understand what visitors want to do. Just I want those visitors to make sure that local people accepted to be taken pictures. Because some people might not like to be taken pictures or it might be an very inappropriate moment.
I often hear that 'Ama' say not to take pictures of their faces and breasts.

I just don't want visitors to take pictures secretly. I think it's rude.

Mostly, local people are very shy.
Since they cannot speak English or any other foreign languages, they are afraid of being spoken by visitors who look like "foreigners".

But it doesn't mean that they don't want to let people take pictures of them.
You can see people smile to you and try to speak to you with easy Japanese.
I know people in Ijika are very kind and nice. But you need some kind of tips to open up their minds.

So, I want visitors to learn some simple easy phrases before they come.
Just saying Hello or asking for pictures might help people to release the tension.
Especially people who work at the ocean have trouble hearing. So, you must speak to them quite loudly. This might be difficult at first, but it helps your communication.

Also, while they are working, 'Ama' and fishermen are quite busy and strained.
I think it's nice to see them from a distance.

Since I opened a guest house this month, I had some guests who wanted to see 'Ama' in this village. I brought them to the local fishing auction market and where 'Ama' dive. I told them what they can do and what they cannot, and helped them to communicate with local people.

I feel lucky about myself because I understand local dialect of Ijika, English, people here, their jobs and lifestyle because I am also an 'Ama'.
I don't need an interpreter or a translator, so I can explain and interpret their conversations on site.

Visitors from abroad may have some difficulties getting into the local community.
I wish to help them as much as I can. 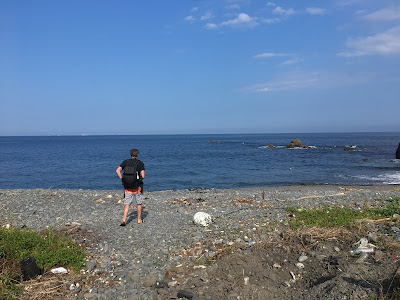 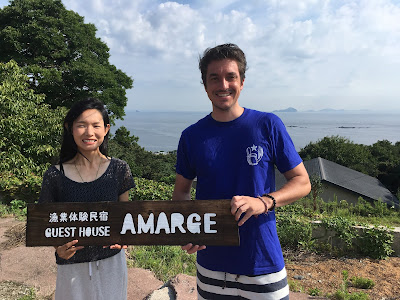 Posted by Unknown at 6:32 PM No comments:

Have you ever tried eating or seeing HIJIKI?

It's a kind of seaweed. The color is black, normally it is selled as dried.

I don't think people in western countries can get this seaweed locally. I'm not really sure, but I think they are only able to be harvested in asia. I know people in Korea also eat this seaweed.

Here in Japan, HIJIKI is a very famous seaweed.
Even though the color doesn't seem like stimulate your appetite, Japanese people love this seaweed, and it is actually very healthy and tasty!

We just started harvesting HIJIKI of this season last 12th.
There is an area called 'Nyukai' or 'Nyukaichi' (pronounce like 'New Kai chi'). It's a shared ocean and shore of adjascent two fishing villages, Uramura and Ijika.
People who has right of fishing in these villages are allowed to go fishing or harvesting seaweed in this area.

Some Ama go to Nyukai for harvesting HIJIKI in Winter, but not all.
In January, water temperature becomes lower than December. So, it is very cold!
To harvest HIJIKI, we don't need to dive. But we wear wetsuit to protect our body from cold water and wind. HIJIKI grows up on rocks on the seashore. So, wetsuit also protects us from getting injury when we slipped while walking on the slippery rocky shore.
It just appears at the lowest tide. Harvesting time is limitted, so we must hurry to cut as much as possible. 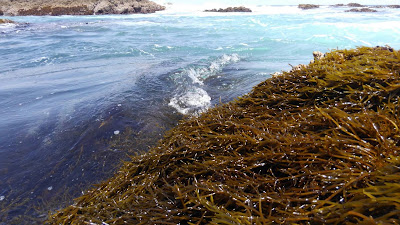 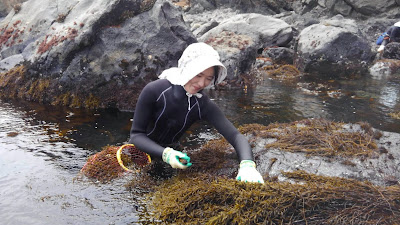 As you can see, the color of the seaweed is originally green.
It turned black once it's sundried. It's pretty unique, isn't it?

Here, I show you photos of my first harvest last year.
(My master was helping me to dry) 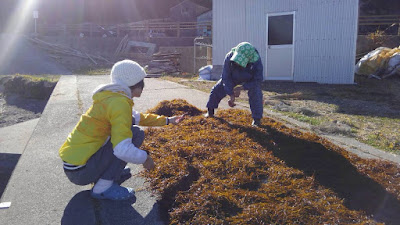 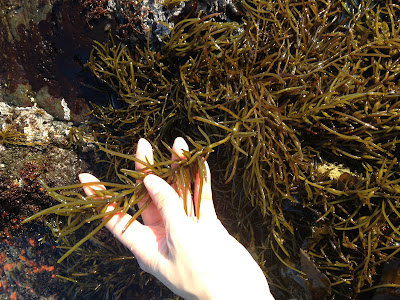 Then, it turned to be black as below. 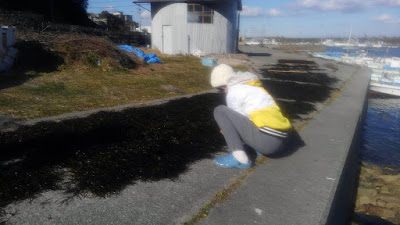 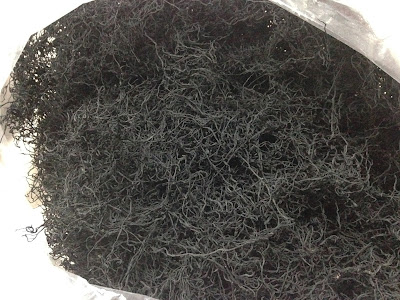 After dried it, HIJIKI becomes thinner and looks like hair of asian women.

When you eat, soak the dried HIJIKI in water for 20minutes and rehyrate it to cook.

I am SLOWLY updating some recipes of HIJIKI cuisines on my website.
So if you are interested in that, please check it out.

That's it for today.

Thanks for watching!
Posted by Unknown at 2:45 AM No comments:

Winter season has started on October 3. And it's going to last until the end of December.

I don't know if people in other countries eat sea cucumbers as well as Japanese people.
The first time I saw it, I couldn't understand how come human has to eat that sort of weird looking creature. It has no eyes, no fins or legs. It is just... round.

They looked weird for the first time. But now I love sea cucumbers!
Sea cucumbers are quite difficult to find underwater. They appear when water temperature gets colder. Till then, they hide their bodies behind rocks and stay still.
So, it's quite an exciting moment when you finally find one. That special feeling makes you like them.

Recently, skilled Ama are getting more sea cucumbers.
It's quite difficult for me to get 3-5. But they get more than 20 or 30. I don't really know where on earth they found that many! They dive into the same ocean with me though. 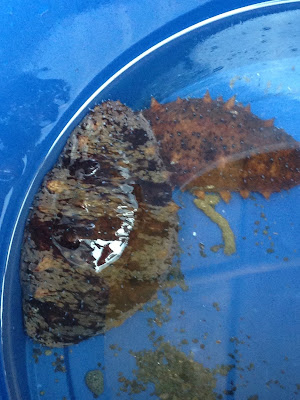 Posted by Unknown at 2:58 AM No comments:

It's been very hot these days.
But when you go out and walk around the harbor, blowing wild and sound of waves make you feel better.

Fishermen and Ama finished their works by August 12th, and started busy days of 'OBON'.

What I think very unique is people prepare meals to ghosts everyday.
Even thought ghosts actually don't eat, people prepare their breakfast & lunch for those 4 days. And menu of each meal is all decided.

An old woman told me that she was terribly busy for these 4 days because she needed to prepare meals for 7 generation ancestors (wow!).

I hardly cook for my husband (he cooks for me though).
If I need to prepare meals for 7 generation ancestors who actually don't eat, plus me and my husband?

I think I need to hire a person for help. 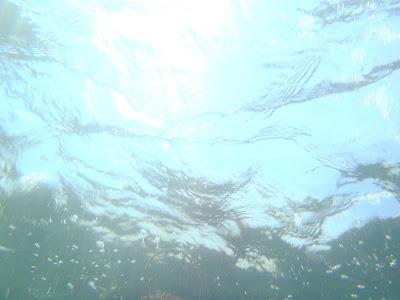 Posted by Unknown at 4:37 AM No comments:

Thank you for visiting this blog.

First of all, let me introduce myself.

I'm Rikako. I am doing Ama in Ijika, a small fishing village located in Toba city.

Ama is a traditional job that only exist in Japan and South Korea, and there are about 2000 Ama in Japan now, and almost a half of them are living in this Mie Prefecture.
Ama is basically women's job. The women dive into the ocean and catch variety of seafood, such as abalone, turban shell, lobster and so on. Diving is not a hobby for them, people make their living with it.


I started doing this job since last October. So, I'm quite new to this job and had no idea how to catch seafood.

As a newcomer of the Ama world, I'd like to share my unique experience with people around the world.

I wish you'll enjoy my blog!

Posted by Unknown at 7:22 PM No comments: